God created the sun, moon, and stars on the 4th day of creation. He said that they were not only to be lights for the earth and for mankind, but that they were to be for signs and seasons, and for days and years. The rising and setting of the sun marks the day, the phases of the moon mark roughly a month, the earth’s movement around the sun and it’s relation to the other stars marks the seasons and the course of a year. These heavenly bodies are God’s gifts to us that help order the times of our life.

They also point, to more than just the passage of time. They point to the fulfillment of time, to the end of time, and to Him who is the Lord of time and eternity, Jesus. Remember how it was a heavenly body, a star in the heavens, that led the Wise Men to the infant Jesus. These wisemen from Babylon were drawn by the star to Bethlehem to worship the Virgin’s Son. Jesus’ first coming was marked by a sign in the heavens. Remember also how, when our Lord Jesus died on the cross for the sins of the world, that there were signs in the heavens. Beginning at high noon, for three hours, all the land was covered with darkness and the sun did not give its full light. This was not simply an eclipse, since eclipses don’t last for three hours. Plus, this was at the time of the Passover, which is about the time of the full moon when eclipses don’t occur. The sun, you might say, bowed its head and dimmed at the sight of the Son of God dying to redeem the world from sin and the power of death.

In the same way, Jesus says, there will be signs in the sun, moon, and stars marking His second coming. There will be familiar signs in terms of eclipses and comets and meteor showers and the like. But there will also be abnormal and unfamiliar signs as well. For the very powers of the heavens will be shaken prior to the close of this age. Not only will the heavenly bodies bow down to our returning Lord Christ, but they will eventually bow out altogether as this old creation passes away and gives way to the new creation that Jesus is coming to bring to His people.
Today’s Gospel warns us against misinterpreting these signs or even missing them altogether. That’s the way it will be with the world. They will say, “Big deal, another comet. A partial eclipse; so what. All things continue as they’ve always been. Don’t talk to me about this second coming of Jesus stuff. He hasn’t come yet. What makes you think He’s ever going to come.” Jesus says that the hearts of such will be weighed down with carousing, drunkenness, and the cares of the life. That’s all that matters to them–having a good time, taking care of their stuff. Jesus warns us to take heed to ourselves, lest we become like them.

That’s a real temptation that we face, to love our time in this world to the point that we begin to prefer it to the time of our Lord’s return and the glorious eternity He has prepared for us. If I were to tell you that Jesus’ second coming was going to occur in exactly 15 minutes, would there be a part of you that is disappointed because of all the things you still wanted to do and see and experience in this world? The prayer of the church is “Come, quickly, Lord Jesus.” Do you find yourself sometimes thinking, “Come, Lord Jesus, but not right away–not until after this or that which I’m looking forward to.” Repent. Repent that you are still so attached to this passing life. Repent that you so infrequently consider Jesus’ second coming, that your hearts are not fully set on Christ and the fulfillment of all things at His return. Watch, lest this Day come upon you unexpectedly as a snare and a trap. Pray that you may escape all these things that will come to pass and be made worthy to stand before the Son of Man when He comes.

For the truth of the matter is that Judgment Day and the second coming of Christ is not something to fear but to greatly desire and eagerly anticipate. Jesus says, “When these things begin to happen, look up and lift up your heads, because your redemption draws near.” Your redemption draws near because your Redeemer draws near. The One who will come on the Last Day is the same One who already came to rescue you from all that would ensnare you and drag you down to hell. Jesus allowed Himself to be snared and weighed down with your sin and death in order to break their power over you. He did not escape the judgment of death so that you would have the gift of everlasting life. Your judgment day already took place on Good Friday. All of your sins were answered for there on the tree of the cross. All those who are baptized into Christ’s death and resurrection share in His righteousness and His life. You who believe have nothing to be afraid of and everything to look forward to when He comes again.

So when you see these signs that Scripture describes, do not let them be for you a cause of alarm or a sign of God’s judgment against you, which it may appear to be. Rather, with firm faith, let these signs be a reminder that you must endure only a little while longer, that your Savior is at the very gates of heaven about to return for you. Don’t give up hope, especially when you see the wicked and the ungodly prospering all around you with seemingly no consequences for their behavior. Remember what Malachi the prophet spoke in the Old Testament, how there will again be a distinction between the righteous and the wicked, between the one who serves God and the one who does not. For now, it’s all muddled together. But on the Last Day the wicked will be burned like stubble in the field. They will see the Lord coming and weep greatly that they rejected their only hope of salvation. It is written in Revelation, “Behold, He is coming with clouds, and every eye will see Him, even they who pierced Him. And all the tribes of the earth will mourn because of Him.” However, you who fear the Lord will be spared for the sake of Christ. The Lord says of you, “They shall be Mine on the day that I make them My jewels.” The Lord will come with healing in His wings, to comfort His persecuted and afflicted people who are His treasure. He will come on the clouds with power and great glory, glory that He gives you to share in, power that He has exercised in love for you.

Jesus says, “Let the trees be your teacher. When you see them budding, even when it seems as if winter will never end, you know that spring and summer are near. Even so, when you see these signs occurring, and on earth distress of nations, even when it seems that you’ve been waiting forever, persevere, endure, continue trusting in Me and clinging to Me. For the kingdom of God is near.” Your faith will soon be turned to sight. And when Jesus appears you will be like Him, for you will see Him as He is.

A few moments ago I spoke of your reaction to the possibility of Christ coming in 15 minutes. That wasn’t an entirely hypothetical thing I was suggesting. The truth is that in a few moments He will be coming to you, in the Sacrament. Jesus said, “Lift up your heads.” In the communion liturgy we say, “Lift up your hearts. We lift them up unto the Lord.” We are made worthy to stand here before the Son of Man by His own forgiving mercy. As it is written, “If you, Lord, kept a record of sins, O Lord, who could stand. But there is forgiveness with you, that you may be feared.” This forgiveness is given to you with His true body and blood.

Therefore, brothers and sisters of Christ, as you see the signs of His return around you, look up and lift up your heads to the heavens. Learn from the sun, moon, and stars–not in the superstitious way of the astrologers. Rather let these markers of time remind you of the ending of time, stirring up your hearts to greater faith in Christ and a greater desire for His return and your deliverance from this world. For the heavens and earth will pass away. But Jesus’ words will never pass away.

In the name of the Father and of the + Son and of the Holy Spirit. Amen.
Posted by Rev. Keith GeRue at 8:24 PM No comments: 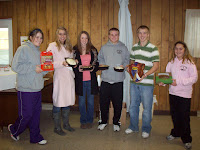 Here are some of our youth at Trinity Lutheran Church. They delivered Thanksgiving dinner to a family in Girard and one in Virden. What a great way to share with others.

Friday they will be in the Virden Christmas Parade.
They have decorated a John Deere Gator with lights and an angel.
They will give out 500 Candy Canes with our Christmas Worship schedule on it.
Watch for pictures to follow! 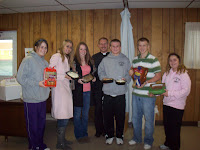 Thank you youth and parents.
Posted by Rev. Keith GeRue at 2:28 PM No comments: